Book Launch: In Our Youth by Angus Scully 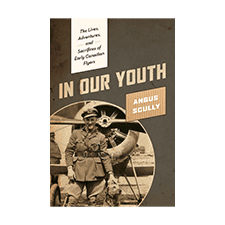 Join Angus Scully of Nanaimo as he introduces his new book, “In Our Youth: The Lives, Adventures and Sacrifices of Early Canadian Flyers”.

The book launch will take place at the Vancouver Island Military Museum where a new display covers the careers of flying aces from Vancouver Island, including Osborne Orr, who was born in Nanaimo and whose story is told in part two of the book.

The book and VIMM display also feature Joseph Fall of Cobble Hill, Charles Hickey of Parksville and Nanaimo, and one of the greatest aces of WWI, Raymond Collishaw of Nanaimo. Also on display are the newly discovered medals of Osborne Orr, generously donated to the VIMM by the Thayer family of Seattle.

“In Our Youth” explores the lives of 32 young Canadian military and civilian flyers, viewed through the medium of archival photography. All of these young men were pilots in the First World War, a time when flying was pure adventure and danger. Some of them were from humble origins, some from elite families, some became heroes, one was cowardly, and most have now faded from our attention. However, all embraced the romance of flight and the danger of war.
https://www.heritagehouse.ca/book/in-our-youth/?fbclid=IwAR0itS5wSBx2JHqbsJ_9EUCXNJ3E4bMbBxnNpAsWPPYNZgUH3VfGrG-HeFE